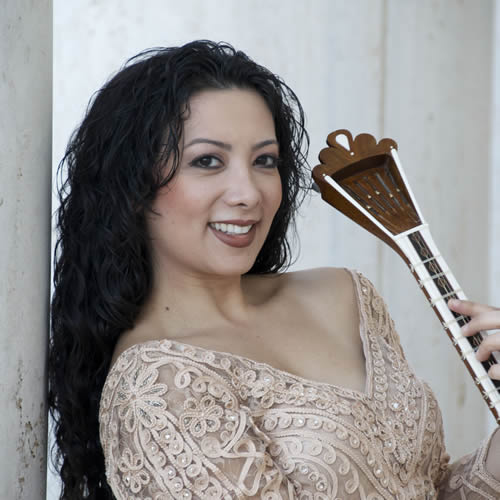 She further enhanced her performance of the renowned capabilities by enjoying the direct guidance of the renowned master of traditional Persian music, Hossein alizadeh, and the respected music theoretician, Dr Mehran Rouhani. She continued her formal music studies in composition at St Petersburgh Conservatory, Russia. she also attended the R.G.S University, Turkey, for a comparative study of Persian and Turkish music.

Sahba was awarded and recognized as the best Tar player by the Iranian Music Festival for four years in a row, from 1995 to 1998.
In 2000 she joined the Iranian National Orchestra and since then she has been traveling around the world to present Persian music. Sahba has recorded several CDs and composed numerous theatrical peaces.

Currently she is a resident of Southern California where she spends most of her time teaching Tar and Setar to her students.
She graduated from California institute of the arts with a BFA in World music performance and dance major.

• Playing for the Iranian Orchestra for Modern Music under the supervision of Conductor Alireza Mashayekhi since 1997 as a. Executive Manager of Orchestra b. Tar Player